Because of the generous support of the late A. Dean Larsen and his family, the L. Tom Perry Special Collections of Brigham Young University is able to sponsor this unique and wonderful conference. 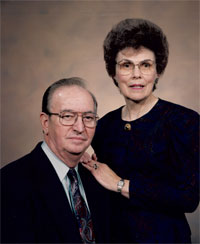 The A. Dean Larsen Book Collecting Conference is named in memory of the retired Associate University Librarian at Brigham Young University, who died on May 29, 2002 of cancer.

Larsen received his BA in History from Brigham Young University and his MA in Library Science from the University of Michigan. He was employed by the Brigham Young University Library for 40 years, retiring in 1995. Larsen was principally responsible for the acquisition of over three million volumes during his career, adding not only to the general collection, but building a world-class Special Collections as well.

His personal interest in collecting rare books and manuscripts resulted in life-long friendships with librarians, collectors, curators, and book dealers around the world. Prior to his passing away, Larsen and his wife, Jean, donated to Brigham Young University their personal collection of more than 1,800 books, pamphlets, maps, photographs, and postcards dealing with Yellowstone National Park (see Larsen Yellowstone Collection) and established an endowment for its continued growth.

A. Dean Larsen was born August 23, 1930 in Vineyard, Utah, a rural farming and dairy community adjacent to Orem and Provo, Utah. He was the third of five children, two older brothers and two younger sisters, born to Vera Alice Austin and Ariel Ellis Larsen. His early years growing up on a farm and in a house without indoor plumbing required his performing daily chores of carrying water from the spring, providing kindling to start the fire in the old kitchen coal stove and the heater in the front room as well as keeping the coal buckets full.

During the war years in the 40’s, a steel mill was constructed in Vineyard thus prompting the relocation of several families living in that area. When Dean was 14 years of age the Larsen family moved to Orem, Utah, where they had purchased a small farm and a newly remodeled modern home. Also on the property was a large barn. With the move Dean’s father started a hide and fur business, thus the barn had a double function of providing shelter for live stock and a spacious area for processing hides and furs.

Dean attended Lincoln High School in Orem where he was on the debate team, associate editor of the year book, president of FFA and a student assistant for a very inadequate school library. After graduating from high school he entered Brigham Young University, focusing his study on history and geography. Summers and evenings were spent buying and processing hides for his father. He interrupted his university study after his sophomore year to serve as a missionary for the Church of Jesus Christ of Latter-day Saints. Upon completion of this two year mission, he returned to his studies at Brigham Young University and obtained student employment in the University Library. From that time on, books and the library became an integral part of his life.

When he graduated from the university with a major in history, the Korean War was under way and he was drafted to serve in the army. After basic and specialized training, he was assigned to the Central Intelligence Corp in Stuttgart, Germany. This assignment and location provided extensive opportunities during weekends and short leaves to experience travel throughout Europe. This opportunity imbued him with a lasting appreciation for the arts, museums, libraries, book shops, rare book dealers, etc. 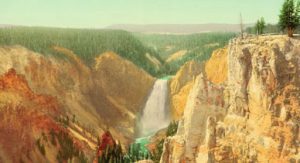 Dean returned home from his tour of duty with the army in the fall of 1956 and was hired full-time at the Brigham Young University library with an agreement that he would be given summers off to pursue a Master of Library Science degree, at the University of Michigan. He completed his degree in August of 1960. The next year he was appointed director for collection development. The fruits of his ability and tireless efforts are now documented with the quality and quantity of books acquired during his tenure at the helm of acquisition for the Brigham Young University Harold B. Lee Library. Dean was also an avid collector of material for his personal library. One of his most extensive collections was materials about Yellowstone. This collection was donated to the library and is now housed at Brigham Young University. He also spent a great deal of time working on a bibliography of Yellowstone material. Before his death, he was able to accrue information for more than 10,000 annotated entries.

From the beginning of his career he demonstrated what some have said is a gift or rare ability – a true “book sense”. It is something analogous to height in a basketball player; it can’t be acquired through training; you either have it or you don’t. He was able to recognize not only the value of the acquisition, but also envision how it would contribute to the collections of the library.

Dean Larsen married Jean Maycock in 1958, ten years after they became acquainted in high school. Their marriage was truly a partnership, allowing Dean to work as Director of Collection Development for thirty-two years and Jean to join the faculty at Brigham Young University teaching and coordinating the Early Childhood Education program for forty-two years. Their four children, David, Paul, Ann, and Charlotte, are Dean and Jean’s greatest accomplishments. Each child holds an advanced college degree, is successful in their chosen profession, and has started a strong family of their own. These things stand as evidence of Dean and Jean’s devotion to their family partnership.

Family was always a priority for Dean. Frequent family trips to Yellowstone and overnight fishing trips with his grandchildren and cherished dog created lasting memories. He took great pride in his children and grandchildren. Although he was very reluctant to ever talk about his own accomplishments, he always enjoyed sharing the many achievements of his children and grandchildren. Austin, who spent most of his first three years of life “caring” for his grandfather, often remarks, “Oh, I really, really miss my Grandpa Larsen.” As do we all.

Dean was largely the architect for the Harold B. Lee Library’s tremendous collection growth during the past 45 years (circa 1950s – 1990s). The library’s world class collections were Dean’s legacy. Even when the library’s holdings reached three million volumes, Dean could tell a book dealer if a particular title was in the library’s holdings. His deep understanding of book culture was evident in his finding, networking, and negotiating with the leading book dealers and collectors of the day, both nationally and internationally. His devotion to his international contacts allowed Dean to acquire collections that would otherwise have been unattainable by the library.

Rare book specialists were drawn to Dean because of his deep appreciation of rare books. Known for his love of fieldwork, Dean often spent his vacation time helping sort and categorize their books. The life-long friendships Dean developed with these dealers were evident in their attitude towards him. They willingly went out of their way to find and offer items of interest to Dean, and gave him first right of refusal.

Dean was respected and admired by his colleagues in the library profession as well. Working together with his library colleagues, including Chad Flake, Sterling Albrecht, Peter Crawley, Scott Duvall, and scores of Brigham Young University faculty members, Dean built a world-class research library at Brigham Young University with outstanding collections in many areas.